ENFORCE SARBANES-OXLEY
In 2002, in response to the Enron scandals, the Republican House and Senate under George W. Bush passed the Sarbanes-Oxley Act.  It was intended to clean up the way corporations were governed in order to protect investors.  It provides that CEO's and CFO's of all corporations must review the corporation's finances and certify that the information being given to the investing public is true and correct.  It is not a "mamby pamby liberal" agenda item.  The law was made by what is arguably the most conservative government we have ever had.  Why, then, is it not being enforced?  Remember the big "housing bubble" and all the people who lost money in it?  You may have lost money then yourself.  Do the people who sustained these losses not deserve justice where there was misreporting involved?  Do you not deserve justice if you were victimized yourself, perhaps through a 401K?
Call or write your Representatives and Senators and demand that Sarbanes-Oxley violations be investigated and prosecuted.  If they do not listen, let us know!  We are here to give the people's voice back to the people.  Only by getting the corrupting influence of campaign funding out of the political process can the people begin again to control the nation's governing agenda.
You can contact us in person at the Hamilton County Courthouse, on the South lawn, which faces MLK.  Online we are at facebook/Occupy Chattanooga
or http://occupycha.tumblr.com/

A company is a piece of property, not a person.  A person is a living being with needs, hopes, dreams, and non-monetary relationships.  The government is intended to be a democracy, of, by and for the people.  Government of the people, by and for a piece of property is just  plain wrong!  Reverse Citizen’s United and end corporate personhood.  You can contact us in person at the Hamilton County Courthouse at 625 Georgia Ave., Chattanooga
On Facebook: http://www.facebook.com/OccupyCHA 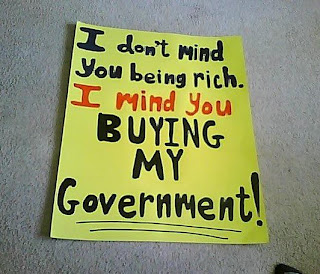 Posted by Robert Thompson at 5:18 PM No comments:

As Americans we affirm that every person has certain rights. The Declaration of Independence refers to the inalienable rights of life, liberty, and the pursuit of happiness. To respect these rights in the case of every person constitutes a fairly well acknowledged moral system in America, and it is one which, like any other moral system, there arise conflicts of obligation.

Back in my dimly remembered younger days, I did some things that I repent, and some that I regret. They do not all match up. It comes from the bottom of my heart to say that at no time did I intend to surrender my personal sovereignty except by agreement, my right to refuse in matters of my private life, nor any other of the prerogatives that make me a human being. In addition, please understand this well, I had absolutely no intention of alienating my inalienable right to pursue happiness.

A relevant part of my younger days are a few affairs that I neither repent nor regret. I guess I could have skipped that part, but if I had skipped it, I would have missed it. Each of the women involved was a unique person that I liked a lot and respected. It comes from the bottom of my heart to say that none of these women intended to forsake her precious, inalienable right to pursue happiness. If any of them ever took human life in order to preserve that right for herself, I understand, and would support her unreservedly. Each of these women gave me something unique that contributed to my growth, my humanity, my self esteem, and my happiness. I fervently hope that I gave that much in return, and added to the self-esteem and happiness of each of my young-adulthood lovers.


With that in mind we now have a way to be more honest with each other than we have been. We need no longer identify ourselves as “pro-choice”, and our opponents as “anti-choice.” Neither do our opponents need to call themselves “pro-life” and us “pro-abortion.” Neither is there any need to get personal; I’ll only drop names like Mc Cary, Martino, Swaggart, Bakker, and Keating to bring us to dispense with that. We can settle our differences in a fair dispute over the right issue. Let us call ourselves onesies and twosies.

This is the true issue. We twosies believe in a woman’s right to have sex as often as she wants to, and can find a willing partner, and not have babies. We have heard the rhetoric that abortion isn’t birth control. We have also heard the rhetoric that all birth control is abortion. We also know the real-life and medical realities that everyone is sometimes driven to their last resorts. Regrettably, for us all, we twosies can only be satisfied with the ultimate protection of our privacy, which is Roe v. Wade. Only that ultimate protection is sufficient to guard every woman’s right to pursue happiness.

I am also not above expressing a profound distrust of the other side with respect to women who choose other options for dealing with unwanted pregnancy. There is not adequate protection for women who carry to term against parental or spousal abuse, nor against discrimination in the workplace. There is no provision made by the state to protect those who want raise children and remain independent. Even maternity leave for those women who want to bear children and have their jobs back was vehemently opposed by those who find abortion so abominable. No wonder we see our opponents as leaving only one choice open to women, celibacy or dependency. If one of those options always worked, we wouldn’t be having this problem.

Sex, though a basic drive is supposedly voluntary. Again, let us try to rethink. If anyone does not eat for a month or two, he or she will die. The semi-clinical environment of a hunger strike may lengthen that time, arduous conditions may shorten it, but the general idea stands. Now I’ll ask a question that I hope you’ll answer honestly, at least to yourself: How long could you go without sex without losing a job, getting divorced, or committing a mass murder? If you give an answer of over a month or two, you are an exceptional person. If you truthfully give such an answer you are even more exceptional. Now let me ask you some more questions: If there is enough room in this world for there to be another child born per couple per couple per year, where is the employment to feed them? Where is the education they need in order just to understand what is required of them? Where is the very land on which they will live?

We are not that far from Bangladesh. In fact, by air, land, and sea, no place is more than a couple of days away. I have never been to Bangladesh, but Rand McNally has. It is the most crowded place on earth, with 1500 people per square mile. It has less than ten percent literacy, is less than ten percent urban, and has a life expectancy of less than forty years. What a life! Thirty something years of being crowded to the edge of one’s nerves, and living and perpetuating oneself on stoop labor. Onesies call this a life. I do not. Onesies claim that this is our just deserts for wanting to remain physically and mentally healthy during our time in this world. I do not. Onesies ask that we trust them, or their Lord, while living conditions in much of the world steadily decline, even while living conditions for people in America steadily decline. I do not.

Roe v. Wade places the burden of responsible population control squarely where it belongs: on the individual women. It is not a limit on the number of children a couple may have, as is done in China. Neither is it a system of enforced isolation and subjugation of women, as is practiced in some Muslim countries. There is abundant evidence that both of these systems of repression were brought about by over- population. There is not, nor will there be, any law against a couple having fourteen children if that is what that couple wants to do. There is, however, a law of sorts, a national consensus, that says that regardless of a woman’s circumstances, she should never be forced into or trapped in that role; that a wife is a man’s partner rather than his property; that a woman should be exactly the mother that she wants to be, of the children that she thinks she can raise conscienciously, and no more. This consensus is inevitable and correct, and should it be overridden by trickery and violence, I am confident that it will re-emerge. As a twosie, and member of the most-the-time majority, I ask for your help in upholding the self- ownership of women. For the self- ownership of every person is the ultimate moral consideration.


RT/smt
Posted by Robert Thompson at 6:59 PM No comments:

We see on TV and hear speeches all the time where conservative speakers are deriding " business as usual ".  Business as usual must be some horrible thing, almost a fate worse than death.  Perhaps worse than being dismembered by mechanical means while hopped up on mescaline.  At least, that's the way conservatives always sound when they say it.

There is, however, another use for that phrase.  My internet went out this weekend.  It would have been " business as usual " if it had not.  My employment situation could use all kinds of " business as usual " before its current state becomes usual.  When we go to the grocery store when its supposed to be open, when we get paid when we're supposed to, when our car starts when we turn the key; are all examples of  " business as usual ".  Without routine, boring things happening every day, life would be as " nasty, brutish, and short " as Rousseau's description of the state of nature.  People cannot live without knowing that certain things will happen in a routine way, for example that fish will swim and grasshoppers will hop grass.  A note to young people:  Just because something is boring doesn't mean it's bad.

The next time you hear the phrase " business as usual ", think about how you live.  While you're thinking, perhaps you can project your own well-intended personality onto someone you don't know, and think that perhaps your situations are somewhat similar.  Try out the notion that what people use is probably still needed.   It is operation, not speculation, that gets things done.  It is repeatability that makes experiments valid; it is " life in a rut " that saves up money.  Since we cannot change that, perhaps we should be careful what we try to change.  Everyone who doesn't already know it should learn a new word: reliability.
Posted by Robert Thompson at 1:13 PM No comments: